Skip to main content
With recent reboots of TV shows, movies, and even video games, you might find yourself wondering if you’ve stumbled into a DeLorean and travelled back in time. Unfortunately, you won’t be floating on your hoverboard anytime soon because the truth is, what you’re feeling is nostalgia… and it’s a fantastic marketing tool.

Nothing allows brands to stay top-of-mind like a trip down memory lane. Gerald Zaltman, a Harvard Business School professor, said that 95% of our purchase decisions are driven by unconscious urges, the largest being emotion. With that in mind, it’s easy to see why connecting through shared memories and nostalgia is a tactic worth exploring.

What is nostalgia and how does it work?

Nostalgia is defined as a “longing or wistful affection for the past“. While you may simply remember what you did last Thursday, a nostalgic memory puts your heart and soul back in that time as though you’re living it again. For me, old photos and certain songs take me back to when buzzing street lights meant it was time to go home and the biggest flex was owning a portable anti-shock cd player. That’s because of a psychological phenomenon called the reminiscence bump, the fuel for nostalgia. It’s also the reason why nostalgia is different across generations.

Basically, the reminiscence bump identifies that experiences from ages 10 to 30 result in the most vivid and deep-rooted memories. With that in mind, it’s understandable why the most triggered memories are often tied to firsts and self-defining moments, like your first kiss, going off to university, etc. So while I get nostalgic about walkmans, someone a decade younger might feel the same way about iPods. At the same time, if we both had a coming-of-age highlight with the same song in the background, we’d both be triggered hearing it today. Get it?

Why is nostalgia so powerful?

In basic terms, nostalgia makes us emotional — usually in a good way. In fact, studies have shown it literally makes you feel warm and fuzzy inside. It’s no wonder then why I follow @insta80s90s on Instagram and continue watching Fresh Prince of Belair and Seinfeld. In a world that seems to travel at breakneck speeds, nostalgia allows me to put things on pause and revisit less stressful times. 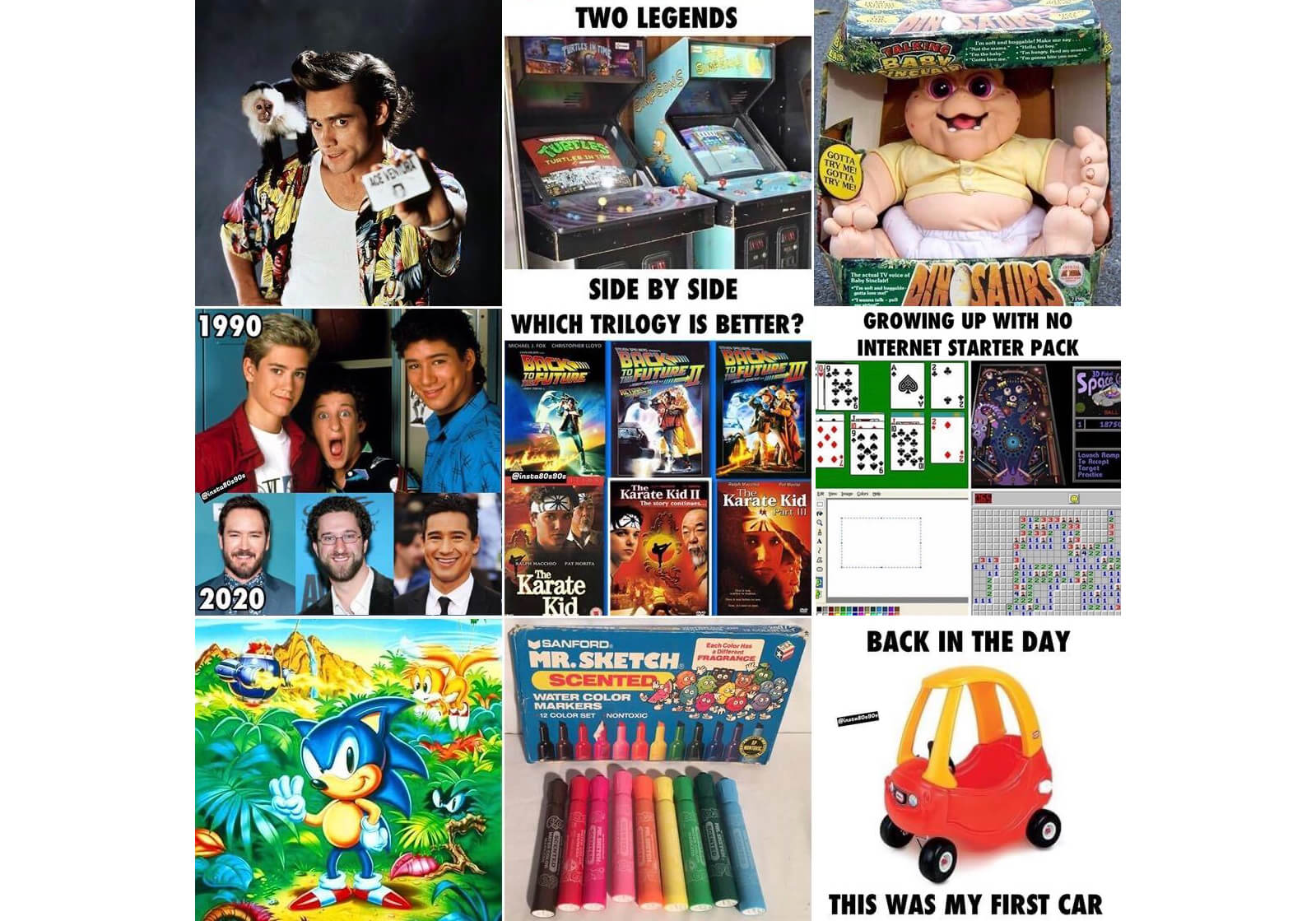 It also makes us feel better about the future. A study from the University of Southhampton found that individuals who wrote about nostalgic events had a significantly higher proportion of optimistic expressions than those who wrote about ordinary memories. Furthermore, reliving memorable moments has a way of giving our lives meaning, with studies showing nostalgia helps us face our own mortality.

Last but not least, research has shown nostalgic events are often associated with people. Whether it be a memory of a first date or a bad breakup, you can be left with an overwhelming appreciation for your family and friends or a heartbroken longing for companionship.

How big brands use nostalgia

With nostalgia’s control over our emotions, it’s obvious why marketers have so frequently weaponized it against consumers. According to the Journal of Consumer Science, people are more likely to spend money and engage when feeling nostalgic. Maybe that’s why Facebook notifies you of Friend Anniversaries and Facebook Memories every other day. Could these milestone reminders subconsciously play a part in your social media addiction?

The Backstreet Boys became an international sensation around 1997/98. Fast forward to 2012 and they’re headlining an Old Navy ad campaign. If we assume the band’s main demographic in their prime was children, their fans would be in their mid-twenties around the time of this partnership. For Old Navy, that’s a perfect demographic to both feel nostalgic about the Backstreet Boys and spend a lot on clothing.

This highlights an important element of nostalgia in marketing: know your audience. Could you drum up nostalgia with New Kids on the Block? Sure, but you’d be catering to a demographic that is probably a bit too old to be shopping for bright pink tights.

Kids of the ’80s and ’90s grew up playing Nintendo. They also grew up fighting with their siblings over just about anything including the controller. Nintendo released this nostalgic commercial featuring two brothers who, as time goes on, grow apart as adults. The commercial documents the fighting at school parties and family dinners, but circles back in the end to remind the brothers of the friendship fostered by Nintendo. As adults, that friendship is reignited by the new Nintendo Switch and every man between 25 and 45 is left wanting to reconnect with their old gamer friends.

Two memories come to mind when I think of Lego: the many masterpieces I built as a kid and the intense pain of stepping on a straggler I forgot to clean up. Lego is an iconic toy that connects children with their imagination. As a child, Lego allowed you to build anything you could dream of. In this ad series, the company does a brilliant job capturing timeless builds like dinosaurs and airplanes to get adults (who have money and kids of their own) feeling nostalgic.

Many big-name brands use celebrities in their ads to gain consumer trust. When Walmart created its online pickup campaign, they decided to do the same but with a twist. To promote the new service, they featured iconic cars and characters from famous movies and shows. With everything from Knight Rider’s Kip to Back to the Future’s DeLorean, the commercial is filled to the brim with nostalgia, and you can’t help but be in awe of seeing all these vehicles again after so many years.

In an effort to connect with Gen X, this campaign by Spotify features ads that compare different generations with clever wordplay. Using classic lyrics, artists, and track names, these ads inject a little humour to engage its audience. The ads highlight that while times may change, our love of music remains the same.

In this commercial highlighting their new Siri feature, Apple uses the sweet-toothed Cookie Monster from Sesame Street — a show we all once loved. The scene starts off with Cookie Monster baking cookies asking Siri to set a timer and play music while he waits.  Various scenes show Cookie Monster doing everything he can to pass the time. What’s great about this commercial is that it not only connects us with a familiar character, but everyone can remember being a child waiting on something that felt like an eternity.

Recently I hit a milestone of seven years at Stryve and thought I’d share some quick nostalgic moments. When I started at Stryve Group, we were just five people above a gas station. Sure, it wasn’t fancy, but we had a blast. The countless birthday pranks, our many pub-crawls, super-soft bachelor/bachelorette parties, and Friday roof beers. Somewhere in between all of that we did manage to do some kick-ass work. It’s a great feeling to see how far we’ve come from our humble beginnings. Here’s to seven more years and a whack of new memories ahead. 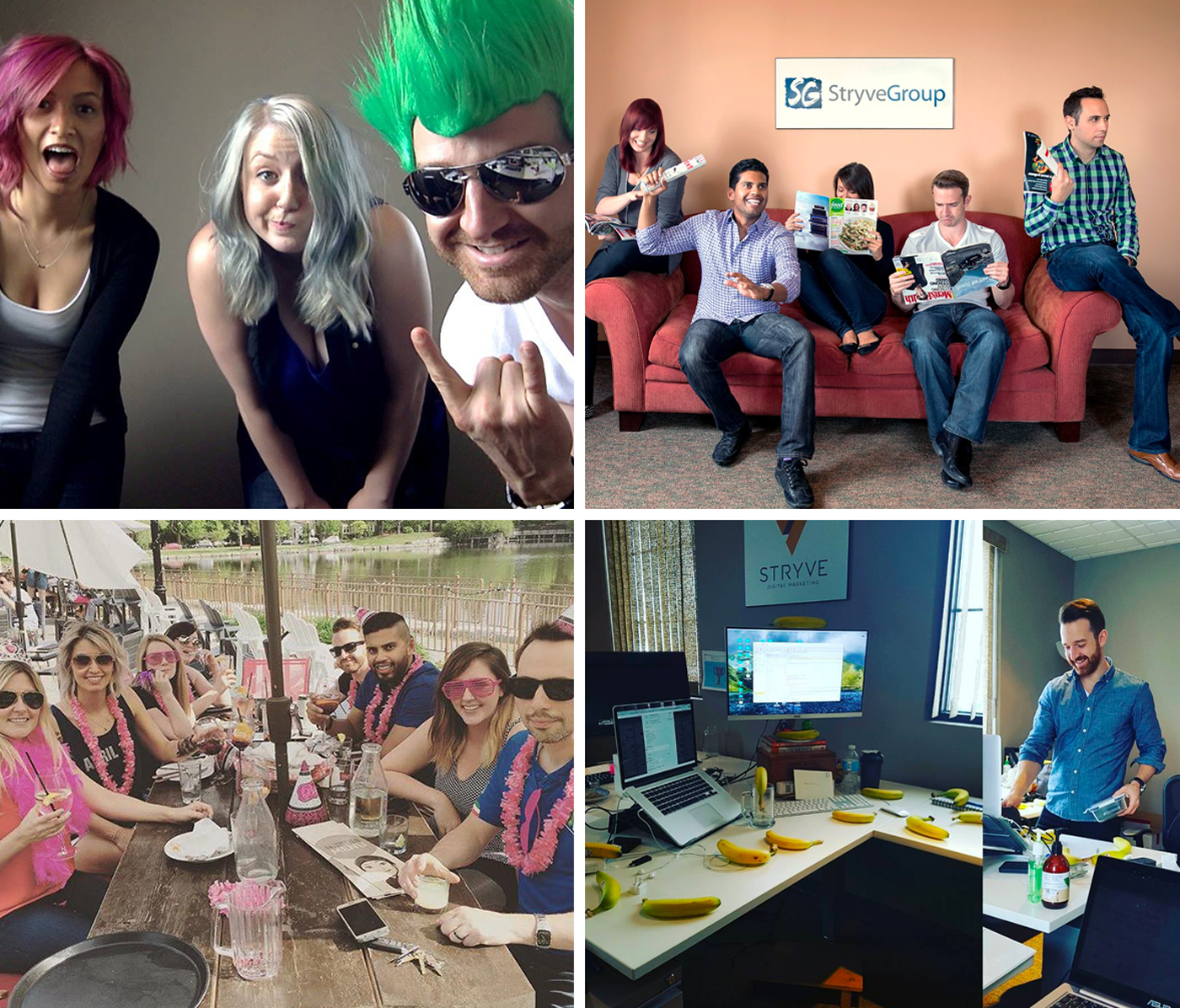 How to survive as a marketer in a cookie-less future

The Gang of Four: Apple, Amazon, Google and Facebook