Like you, I’ve been self-isolating for what feels like forever. I’ve been going on walks, I’ve been cleaning parts of my house that I didn’t know existed, and I 100% believe Carole Baskin killed her husband.

I binged Tiger King in one sitting, yet I’ve been more interested in the world’s response to the documentary than the documentary itself. Specifically, I’m fascinated by the hatred for Carole Baskin and the contrasting love for Joe Exotic. With both characters profiting off animal captivity and the sweat of underpaid employees, Carole Baskin seems to be one of the most hated people in America while almost 60,000 people have signed a petition to free Joe from prison. They’re both terrible people, so why do we make excuses for one and condemn the other?

I think the answer is authenticity. While Carole, a perceived murderer, seems to hide behind the guise of animal activist, Joe refuses to cut his hair and admits to being broke as shit. Sure, Joe openly fantasized about murdering Carole, but at least he didn’t lie about it!

As people, we value honesty and despise being misled. We talk about trust as the key ingredient to a successful relationship. It’s no wonder, then, why as modern-day consumers we demand brand authenticity. But what does that actually mean?

How much do we value brand authenticity?

Forbes cites Facebook and its mishandling of user data as a catalyst to authenticity becoming the leading factor in consumer decision making. Whether it’s your Smart TV tracking what you binge or your thermostat listening to your end-of-day rant, the misuse of personal data has led to a consumer culture of distrust. The result of our trust issues is the demand — and subsequent valuing — of brand authenticity.

Studies show 90% of Millennials say authenticity drives their decision making when it comes to purchasing, with Gen X at 85% and Boomers at 80%. Further to that, a 2019 study by Edelman showed 81% of consumers say they need to trust a brand to buy from them and 67% of consumers will jump ship if that trust is broken — even if it means turning to an inferior product. Remember these stats.

All of this is to say, in 2020, authenticity beats all when it comes to consumer demand. But what does that look like in an environment where consumers default to distrust?

Corporate Social Responsibility and its role in Authenticity

If you do your research on how brands can position themselves as authentic, you’ll quickly find yourself questioning the meaning of the word. Specifically, “authenticity” and “brand authenticity” appear to be different things, with the latter becoming almost synonymous with social purpose. In short, when we talk about consumers choosing authenticity over product and price, we’re not talking about honesty, we’re more so talking about consumers prioritizing social impact and ethical makeup.

Forrester words it perfectly when they say, “embedding your values into your business operations is hard but necessary to convince jaded consumers that you are truly committed”. With 81% of consumers saying a company’s social purpose drives their decision making, it’s easy to see why the worlds leading brands are spending billions on Corporate Social Responsibility.

It doesn’t stop there, though. To be fully transparent, many prominent companies publish their CSR reports so consumers can do their homework. But you already knew that, right? Before you buy anything, you hop online and flip through pages and pages of charts and tables to verify you’re getting into bed with an ethical business? Yeah, me neither.

More likely, you buy into what you hear from your friends and see online. You buy Dove because you saw their Instagram post of a woman who looked like you. You shop at Whole Foods because they love the planet, and you boycott Nestle because they have a 97% CSR rating…

Wait, Nestle has a 97% CSR rating? I thought they wanted to privatize water? I thought they were choking out the fish? I have a #woke friend who makes his own deodorant and he told me so. Are you saying he’s wrong?

How we measure Social Purpose and Authenticity

Honestly, Nestle’s CSR rating surprised me. In fact, I was so surprised that I’m left questioning CSR as a measurement rather than my preconceived thoughts on Nestle. As a distrustful consumer, I can’t help but believe the bad. But as a marketer, I can’t help but question when a brand seems too good to be true.

Do any research about modern social purpose and you’ll find Dove and their “Real Beauty” campaign. Geared towards tearing down the beauty standard, they show women of all shapes, sizes, colours, and ages. The 2004 campaign is still going strong today and is widely viewed as the gold standard of brand authenticity and social purpose. It’s also marketing.

For all the good feels it’s fostered, it doesn’t take long to find blemishes. In 2017, Dove apologized for an ad showing a black woman turning into a white woman and walked back a similarly racist ad in 2011. In the UK, they released body-shaped bottles that oversimplified body insecurity and came in a single colour — white. On top of it all, they’re still directly associated with brands shopping skin whitening products outside of North America where evidently, the beauty standard is a little less black and white.

Sure, no brand is perfect, but if this is the best example of social purpose and this is what consumers say they’re looking for, it seems incredibly shallow.

How much do we really value authenticity?

Remember Ashley Madison, the dating service enabling married folk to commit adultery? They were hacked in 2015 and as a result, the identities of their customers were released online. From there, you’d expect lives to be ruined and the company to go up in flames, yet things have never been better. In fact, Ashley Madison hit 60 million members last year — that’s 10 million more than Tinder. That’s right, a company built on zero social and ethical purpose grew stronger after breaking trust and potentially ruining the lives of every single customer.

It begs the question, how is that possible when 67% of consumers say they’ll jump ship when their trust is broken? Where are the 90% of Millennials who say social purpose trumps all? It’s not like Ashley Madison has a monopoly on shady hotel hookups. Could it be that consumer research on authenticity is inauthentic? Or is it that consumers say what they want to believe, but do what is best for them?

Look at Gillette and their Dove-like mission to end toxic masculinity. They tried to ride the wave of the #MeToo movement but wound up taking a bath. The intention was there, they even coupled the ad with real donation initiatives. So why didn’t we value the intent over the follow-through like we have so many times with Dove?

As Forbes points out, Gillette’s razor market share dropped by over 20% between 2010 and 2017 due to disruptors like Dollar Shave Club. Could it be we’re less quick to forgive because we’ve already had our eye on a more convenient lower priced product? Were we just waiting for the next petty fight to break up with someone we stopped loving years ago? Maybe Dove gets a pass because they’ve been our clear favourite for the last decade and we’ll be less forgiving when Dollar Soap Club takes off?

So what is authenticity really about?

What I’m suggesting is that authenticity and social purpose are not the priority of consumers, but a sweetener — a way to cope with the ugly truth that consumerism is still self-centred.

I’ll use myself as a pathetic example. A few years back, I bought glasses from Warby Parker, the popular retailer known for their Buy a Pair, Give a Pair initiative. Sure, my purchase had a positive ripple effect, but I also saved a hell of a lot on glasses. Further to that, they had the best selection of styles. I went with Warby Parker because of the price and product, yet their corporate social responsibility is always the first thing I mention when giving a referral. Why? Because like you, I’d rather be seen as philanthropic than cheap.

While consumers demand authentic brands, they themselves aren’t authentic in revealing what really drives their decision making. Don’t get me wrong, I think both the world and organizations can benefit from authenticity and social purpose, but they’ll never make up for a subpar product or customer experience.

On a lighter note, here’s a photo of Friday, the Stryve-sponsored service dog! 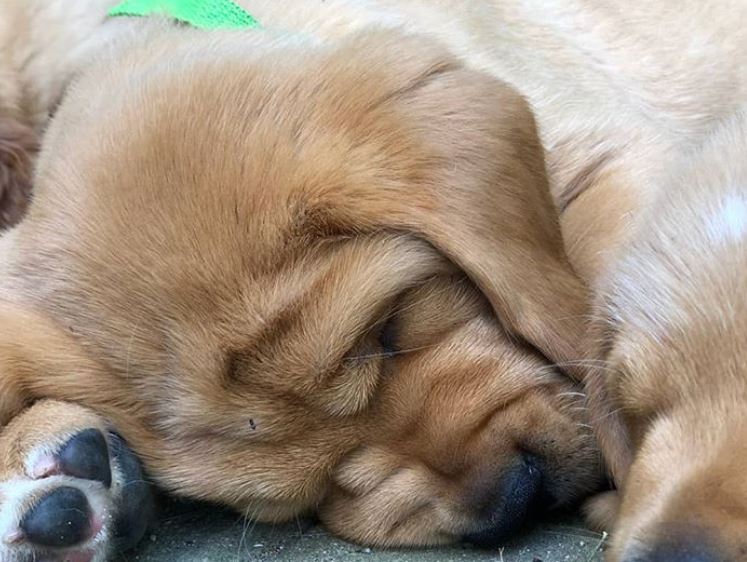 7 digital marketing trends for 2022 (and beyond)

Why Don Draper would fail as a modern marketer

Fortnite is creating a new world of marketing opportunities

What we can learn from Deadpool 2’s marketing masterclass