It’s the longest 5 seconds of your life. You look around the room, trying to read the expressions on their faces. Is that consideration or confusion? Do they think it’s stupid? Do they think I’m stupid?

It took twenty minutes to build up the courage to speak your idea into existence. You went over it in your head a million times. You know it’s good. You think it’s good. Come on, someone say it’s good!

Karen clears her throat from across the boardroom table. She closes her eyes and lifts her hand like she’s about to recite Shakespeare. She begins with three words, the worst three words for a situation like this.

Brainstorming sessions are supposed to be a safe space where ideas can run free, so why do they always warp into battlegrounds where emotions trump logic, volume equals expertise, and “divergent” devolves into “convergent”? Is it because people get married to their ideas? Is it because politics and hierarchy influence opinion? Yes. It’s also because people approach things differently and brainstorming comes in different ways to different people. Negative Nancy is gonna shoot down everything and emotional Karen is gonna get stuck in her feelings. This is no way to ideate.

The success of your brainstorming session hinges on people being aligned. Everyone needs to be on the same page when it comes to the primary issue and goal. The first step in achieving this alignment is to add structure to your brainstorm.

With that, here are three kick-ass proven methods for creative and divergent brainstorming sessions.

To effectively explain these methods, we need an example issue. To keep it simple, we’re going with something we’ve all experienced: trying to plan a team lunch. The parameters? We want something good, but we only have an hour to get it, eat it, and get back to work. With that in mind, this is the decision-making matrix we’ll use to plot our ideas.

Nothing kills a brainstorming session like pride. People can get so wrapped up in the fear of saying something stupid that they opt to say nothing at all. Ideas — good or bad — are the fuel for your session and you’ll go nowhere without them. Think quantity over quality.

The Worst Possible Idea eliminates the fear of looking stupid by forcing everyone to look stupid right off the bat. As the name implies, the objective is to come up with the worst ideas.

So, what are a few terrible lunch ideas? How about just skipping lunch altogether? Alternatively, we could mix up all the left-behind crap from the back of the office fridge. We’ve got plenty of expired condiments to spice things up. Bon appetit!

Once you have your bad ideas, you’ll run back through them and see if they can be flipped into good ideas. So, instead of skipping lunch, maybe we skip work? What if once a month we took an entire afternoon to have a big-ass team lunch? What would that do for the culture? Could we invite our clients or neighbouring businesses? Instead of mixing everyone’s office leave-behinds, we could mix things up with an office potluck.

If lunch was an immediate need, a bad idea could be Pizza Pizza. Flip that and suddenly we could find ourselves having another pizza showdown to find the best za in KW (it’s Roma btw). The Worst Possible Idea is a great way to break down your walls, whether they be walls of anxiety or the restricting box in which you think.

All problems come with constraints like budgets, timelines, physics, reality, and so on. This method forces teams to ignore constraints by addressing the problem through the lens of different questions. Questions like, “what would you do if you had no money?” and “what would you do if you had unlimited money?” keep your thinking within a certain ballpark while questions like “how would you solve the problem with zero gravity?” and “what would Superman do?” force you into a more creative headspace.

So, what would Superman do for lunch? Maybe he’d fly around the world and get something from every country. Maybe he’d BBQ with his heat vision.

Clearly, these aren’t realistic options for us, but we can run with these ideas. We can’t fly around the world, but we can hit the food court and choose between Thai, Greek, and a handful of other cuisines. We don’t have heat vision, but we could go for Korean BBQ and watch our food get cooked. See what I did there?

Eliminating constraints forces you to approach the problem through a specific creative lens. When you come up with out-of-this-world ideas, think laterally to bring them back to earth as real possibilities.

Is there anything worse than a brainstorming session full of people going in opposite directions? Everyone’s on a different page approaching the problem from a different place. I have the perfect image to capture that feeling: 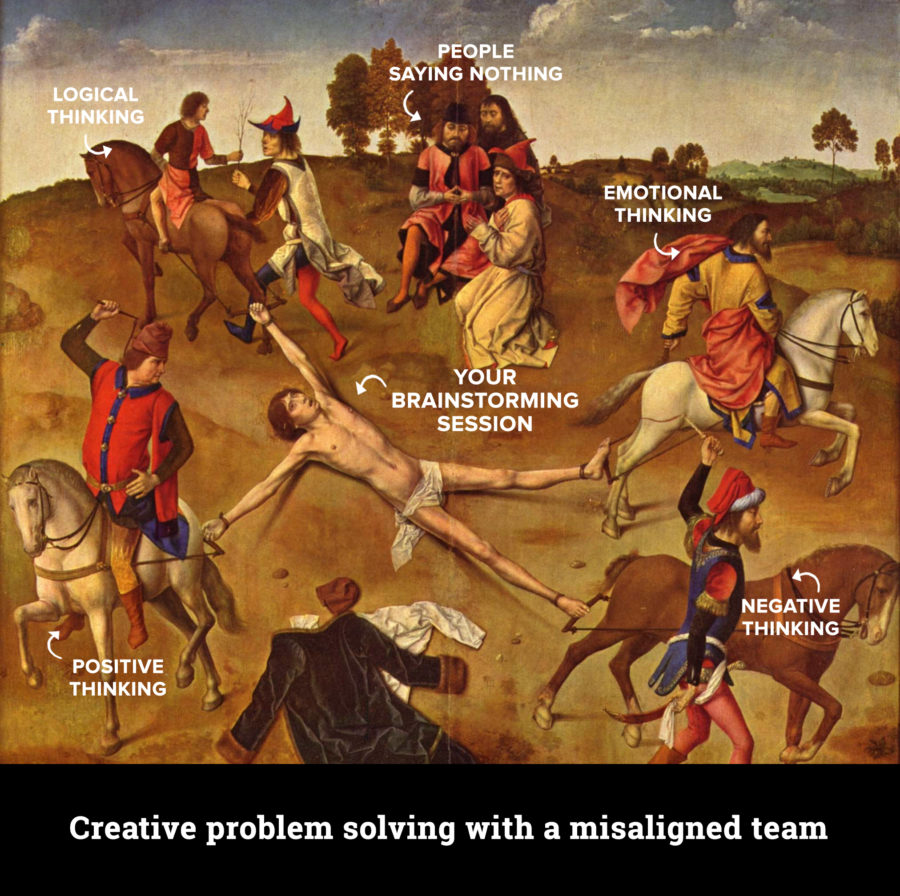 This is the result of people defaulting to their go-to ways of thinking. Debbie Downer will find problems with anything while Positive Pete will be over-optimistic. You’ll have the engineering types who need everything to add up while others get their feelings all over the place.

The 6 Thinking Hats method is a foolproof way of getting everyone on the same wavelength at the same time while taking the time to explore all wavelengths. It was developed by Edward de Bono, a psychologist and philosopher who basically invented the idea of lateral thinking.

For this method, you’ll literally be putting on your thinking hat — six of them, actually. Each hat has a different colour representing a different perspective: 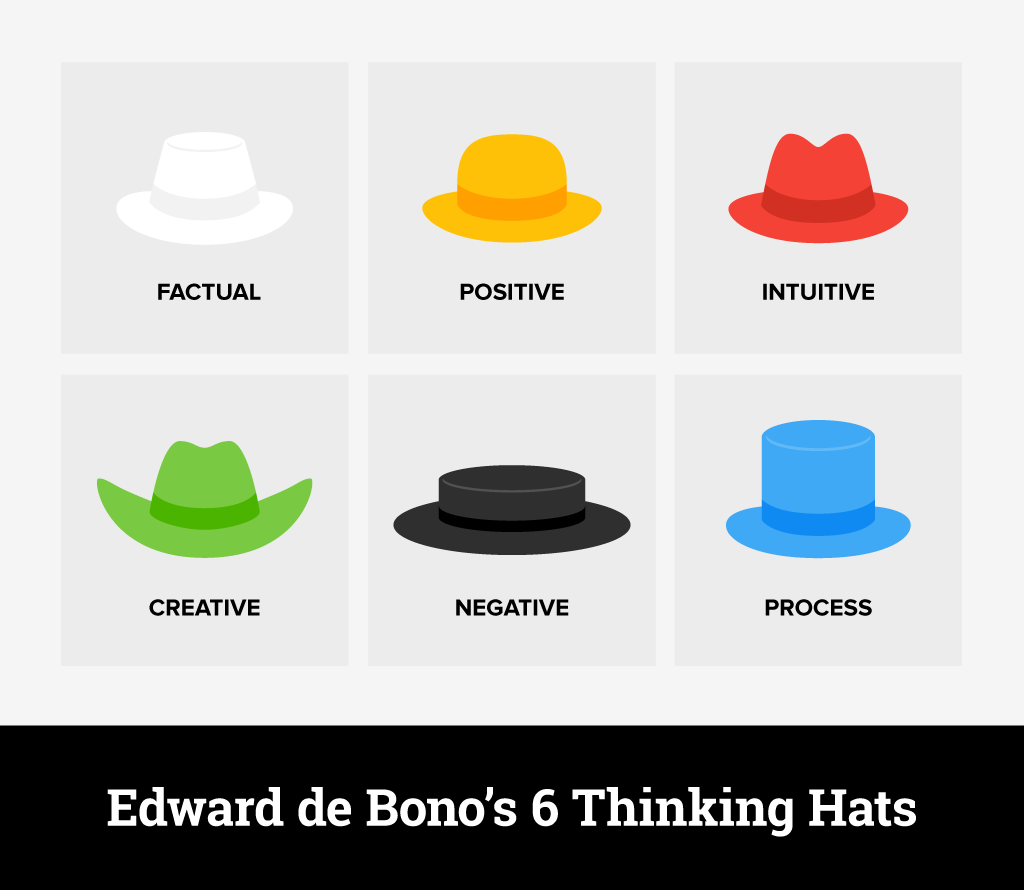 When everyone puts on the white hat, the group is forced to look at the facts and data surrounding the issue. For Stryve’s lunch, this would mean considering the time limit, narrowing our choices to the grocery stores and restaurants close by. Money, group size, allergies – these are all white hat factors that will come into play and guide our decision-making.

When the team puts on the red hat, it’s time to get emo. This is where you can base decisions and ideas on emotion. For lunch, this is where Karen can listen to her gut and say, “I feel like Burger King has the best burger in town.” This statement would get shot down in the white hat session because it’s factually incorrect, but it’s perfect for red hat thinking.

For the black hat brainstorm, teams are pushed to point out flaws and potential negative outcomes. While Karen’s Burger King obsession was valid for red hat thinking, Greg’s experience with food poisoning looms large. Teenagers are gross, what are the chances they washed their hands before scooping your fries?

Black hat thinking is important because it can point out critical flaws you may have otherwise never considered. We have an hour for lunch, but if we go fast food we could all be violently ill in the afternoon. Sounds like a dealbreaker.

Yellow hat thinking is the opposite of black hat, with teams focusing on the positives. If we go to Tim Hortons for soup and sandwiches, someone could win a car on Roll Up The Rim. Same goes for McDonald’s if they’re doing Monopoly.

The green hat is for creative thinking. For this part of the session, you could bring in more questions and prompts from the second method or go back to the Worst Possible Idea. Regardless, the goal for green hat thinking is quantity over quality with criticism left out.

The final hat is the blue hat, which is used to evaluate the session itself. When the blue hat is on, the team can look back at the production of the brainstorm and determine if they need to spend more time wearing any of the hats or call it a day.

Now you have something to work with

After going through any of these methods, you’ll undoubtedly have a list of ideas to choose from. To structure your approach to these ideas, plot them on your decision-making matrix to see how they align with your objective. Like this:

So right away Burger King is out of the running while Korean BBQ and Roma are premium options. Everything falling in the “Maybe” quadrants is up for discussion or vote.

These are just 3 of the many methods available for divergent thinking and creative decision-making. With willing participation and buy-in, these practices should help structure and drive your brainstorming sessions to reduce the talking-in-circles and tough crowds we’ve all experienced. What’s more, these methods should breed new ideas and strategically guide decision-making for better outcomes. Good luck and enjoy the Korean BBQ.

How to stay creative at home

Nail your next rebrand with divergent and convergent thinking

Business owners, this is how you eliminate your decision-making bottleneck

Why you didn’t get the logo you wanted 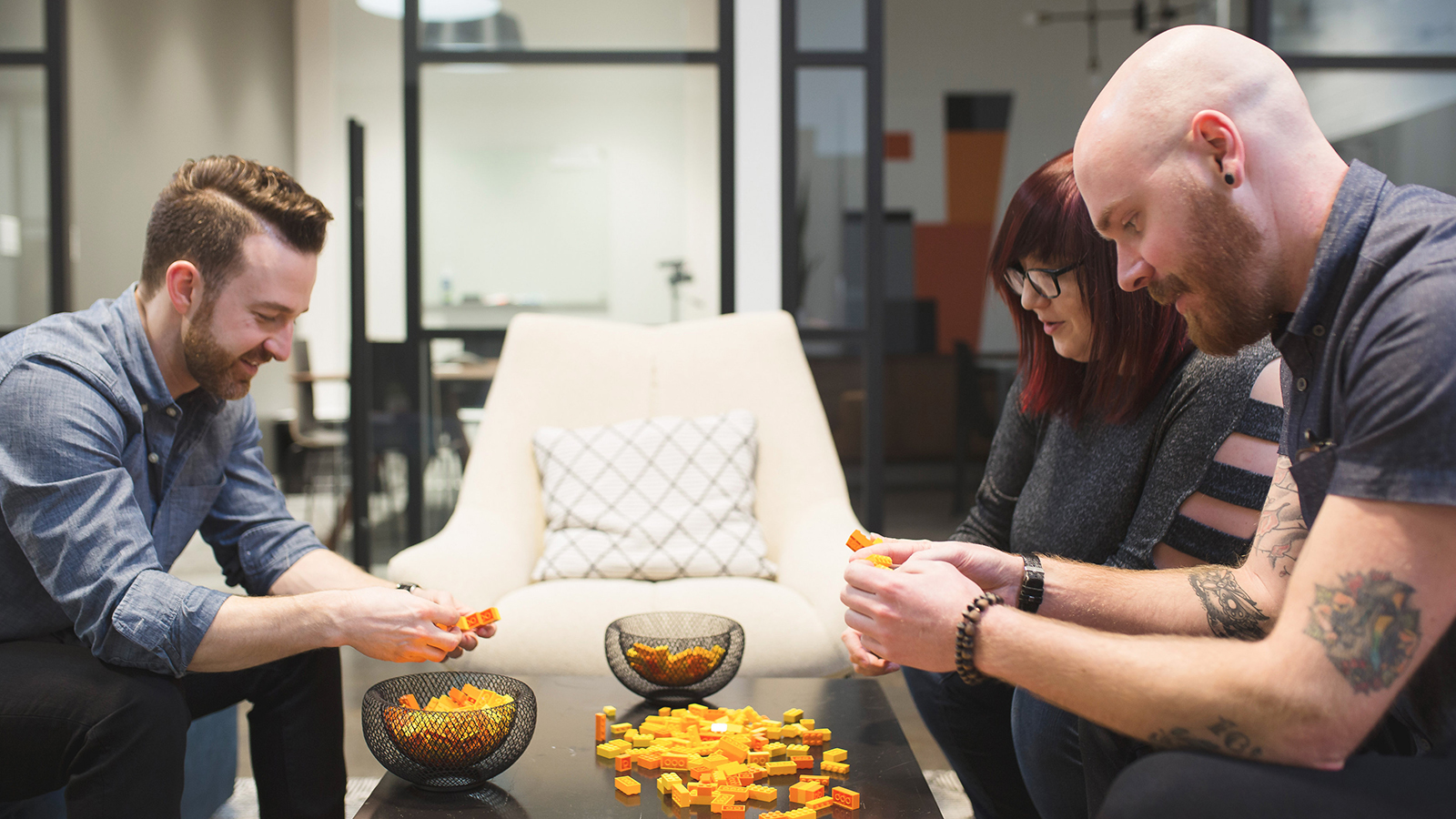 What is ‘Design Thinking’?