There’s no doubt Google Display Network (GDN) is an advertising juggernaut, reaching 90% of internet users and giving access to a network of over two million websites and over 650,000 apps. It’s great, but like most ad platforms, if left unchecked, you can wind up wasting your budget on irrelevant clicks and traffic.

GDN is a totally different beast than Search and comes with its own list of complexities, quirks, and pitfalls. Continue reading to learn how you can get around them.

Let’s say you’re checking your placements and see some of them have really great CTRs…like, really great. 50% CTR? 100% CTR?! Not to mention your low CPC is getting lower and lower by the day. Is this real life?

I’m sorry to be the bearer of bad news, but it’s probably too good to be true.

Make sure you’re doing more than just looking at the basic metrics in GDN because they can tell a different story than your website analytics (tip: be sure to connect Google Ads to Analytics and enable the bounce rate and average session duration columns). If you’re using a remarketing audience, but still see high bounce rates and low conversions, something’s up and it’s time to investigate further.

Your targeting might be dead-on but there’s one factor you may not have considered: kids. 60% of parents use their phones and tablets to occupy their kids while they handle errands, housework, and other tasks. So while the moms and dads might be your perfect target audience, your impressions may be going to babies and toddlers. Same goes for clicks.

The result? A lot of wasted dollars and some less-than-ideal behaviour data.

It’s easy to see if this is happening in your campaigns by checking ‘Where your ads have shown’. Are you suddenly seeing a lot of clicks coming from games, apps geared towards children, or kid-themed Youtube channels? Bingo. While you don’t want to assume anything about your audience and the sites they’re interested in, you can draw some conclusions when Youtube Kids is tallying clicks for your ad on heavy machinery.

Display ads can be large and clicks can happen accidentally, especially in the clumsy hands of children. So, before you take your stats at face value, look into your placements to see where clicks are coming from.

Sites & apps that incentivize clicks could be the culprits

Google isn’t the only one looking to make money. The sites and apps your ads are placed on also make money off the clicks you pay for, which incentivizes them to get even more clicks. Sounds great, right? You share a common goal and everybody wins.

Unfortunately for your campaign, clicks don’t equal conversions. In order to get clicks, sites can be downright sneaky, placing ads where users are more likely to click by accident. This is especially the case for mobile apps and games using “rewarded ads“, which get users to click ads or watch commercials in exchange for game-related incentives.

Machine learning can make this issue even worse, optimizing in favour of sneaky sites because they drive the most traffic, while simultaneously adding these irrelevant users to your remarketing audience.

If you’re not running a select few managed placements, then you should be checking in regularly to see where you might be wasting budget. It might sound counterintuitive, but I like to sort my placements by CTR, highest to lowest, and then scrutinize anything with a super high CTR (100% CTR? You better believe I’m suspicious). Use conversions as an indicator of a great placement.

Things can get awkward

Google’s ability to analyze a page and determine its theme is pretty impressive, but it doesn’t always get it right. In fact, sometimes it gets downright awkward by matching certain ads and certain content. Don’t be forever cemented in the internet hall of shame as the company that ran an alcohol ad next to an article about drunk drivers. Unless you’re not my client. I always love a good ad placement fail. 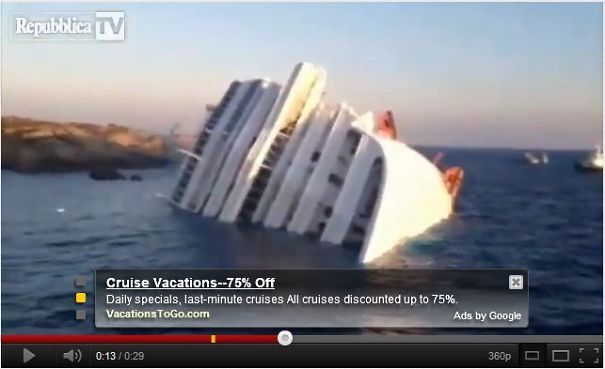 Though this won’t necessarily be a budget waster, it’s not a good look. Use negative keywords to prevent your ads from running on a site or webpage with a theme that doesn’t jive with your brand. And if you’re a funeral home or anything death-related, consider using the ‘tragedy and conflict’ excluded content account setting. Don’t get me wrong, I think machine learning is awesome, but when you combine unguided machine learning with a platform driven to make money, you’re sure to run into a few problems.

For me, GDN is the perfect platform for brand awareness campaigns. I like to equate it to the billboards of the internet. It’s a cheap, effective method of getting your ads in front of a lot of eyeballs, and is especially successful when using a mixture of retargeting and similar audiences. When managed properly, GDN can drive amazing results. When managed improperly, you risk burning budget, getting mislead by flawed data, and becoming an online joke.

Feeling a little overwhelmed and want some help with your Google Ads campaigns? We gotchu.

Kaleigh is passionate about all things creative–from lettering to 3D printing to illustration. She also really loves video games. Like, a lot. Maybe too much.

Make and track UTMs easily with this handy template

How to give your marketing agency access to your PPC platforms

What the heck are they talking about? A guide to understanding the basics of Google Ads terminology

Why more Canadian businesses should be taking advantage of Connected TV

Why TikTok might just be the next big marketing platform